Repeatable and reliable builds for large JavaScript projects are vital. If your builds depend on dependencies being downloaded from network, this build system is neither repeatable nor reliable.

One of the main advantages of Yarn is that it can install node_modules from files located in file system. We call it “Offline Mirror” because it mirrors the files downloaded from registry during the first build and stores them locally for future builds.

“Offline mirror” is different from cache that both npm CLI and Yarn have. Caches store already unzipped tarballs downloaded from registry, they also can be implementation specific and may be invalid between multiple versions of CLI tools. The tarballs in “Offline mirror” can be consumed by any version Yarn that will build cache based on them. It is also easier to store files when they are compressed.

Let’s set up “Offline mirror” for a simple JS project

When you run yarn install, the generated yarn.lock file has sections for every dependency:

Each of these dependencies have a resolved field with a remote URL. If you delete your node_modules folder and run yarn install again, Yarn will download the same resolved dependencies specified in this lockfile. It will even guarantee that no one modified the files since your first installs by verifying checksum for each of them.

However, if for some reason these urls are unreachable during your build, it will fail. To solve this, we’ll need an “Offline mirror”.

First we need to setup a directory to be our “Offline mirror” storage, we can do that with yarn config command:

./npm-packages-offline-cache is an example location relative to home folder where all the source.tar.gz files will be downloaded to from the registry.

Offline mirror does not come with removing tarballs. In order to keep the cache folder up to date, you need to add the following to the config file:

This feature is only available in version 0.23.0 and above.

This will create a .yarnrc file in your HOME directory. Let’s move this file to the project root so that offline mirror would be used only for this project.

(In the unlikely event that yarn config didn’t update the file in your home folder, e.g. if you are running yarn config as root inside a Docker container, the file being updated might be a different one. Use yarn config list --verbose to locate the proper file.)

Remove the node_modules that got generated previously and run yarn install again:

The dependency resolutions in your yarn.lock should look the same as the original (you shouldn’t have any diff):

The offline cache file will be stored in the npm-packages-offline-cache folder that was configured earlier. Each resolved dependency also contains a checksum after the file name to ensure that no one mangles with the downloaded files.

If we look inside the “Offline mirror” folder we’ll see the .tgz files that yarn will use for the following builds without reaching out to network:

How can you test to make sure it is offline?

In a nutshell, to enable “Offline mirror” for your project you need:

A few tips and tricks

If you want to make sure you have a clean cached modules, here are few of the steps you can take:

You can check in “Offline mirror” into git or mercurial repository

The “Offline Mirror” can be shared between build servers or development machines in any way that is convenient: a Box / Dropbox folder, stored in source control or on a network drive. At Facebook the offline mirror lives inside of our big Mercurial “monorepo”.

Whether to commit binary files into a repository or not depends on the number and size of your project’s dependencies. For example, out of 849 React Native dependencies totaling 23MB, only 10% are larger than 30KB. 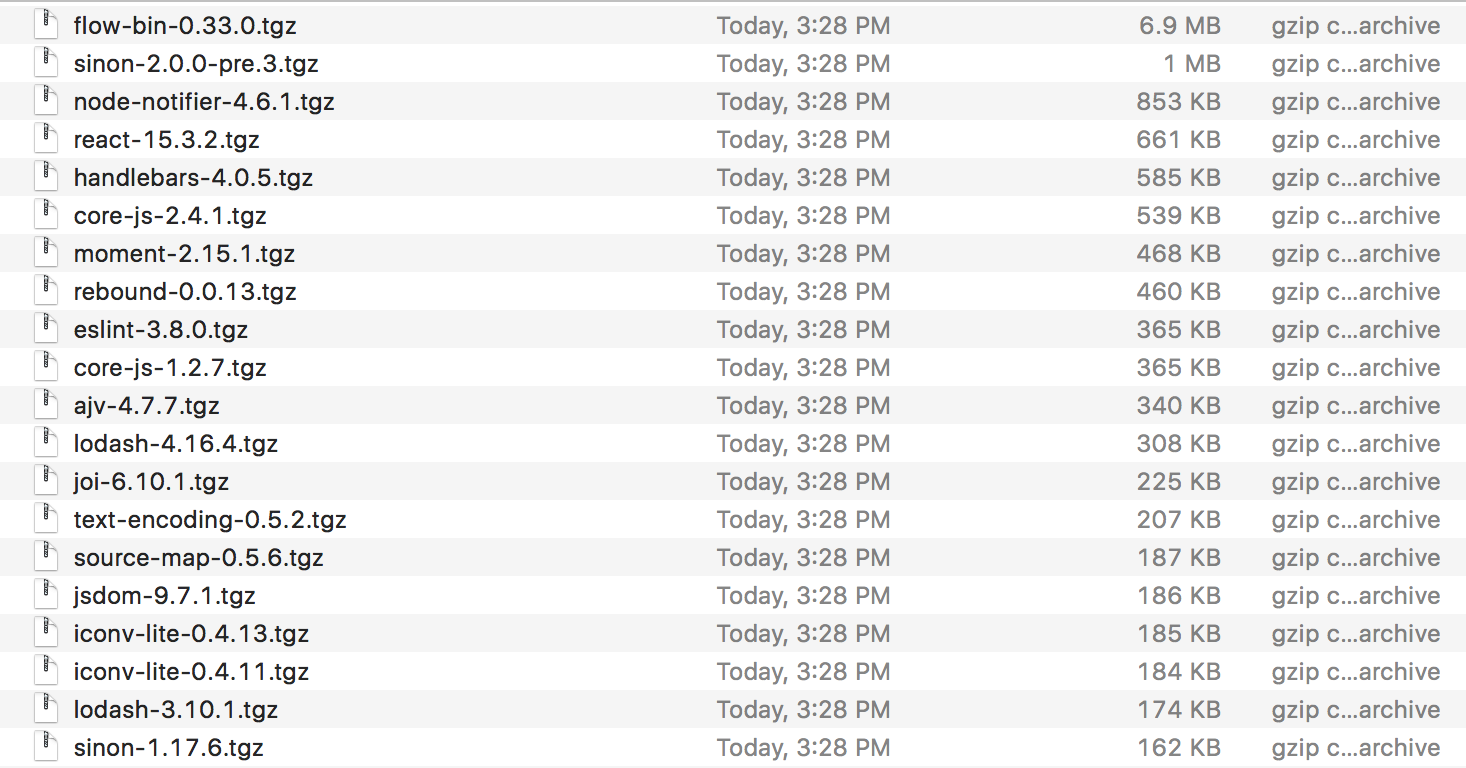 Many Facebook teams, including the React Native team, decided to check in their “Offline mirror”. They all share the same “Offline mirror” which means that most dependencies for new projects are often already checked into that folder, so the cost of storing the packages in source control gets lower the more projects use it.

The React Native team used to check in the node_modules folder but they hit several limits:

In comparison, updating a third-party dependency with the Offline Mirror adds just a few files that are very easy to review:

Did you know that Yarn is also distributed as a single bundle JS file in releases that can be used on CI systems without internet access? 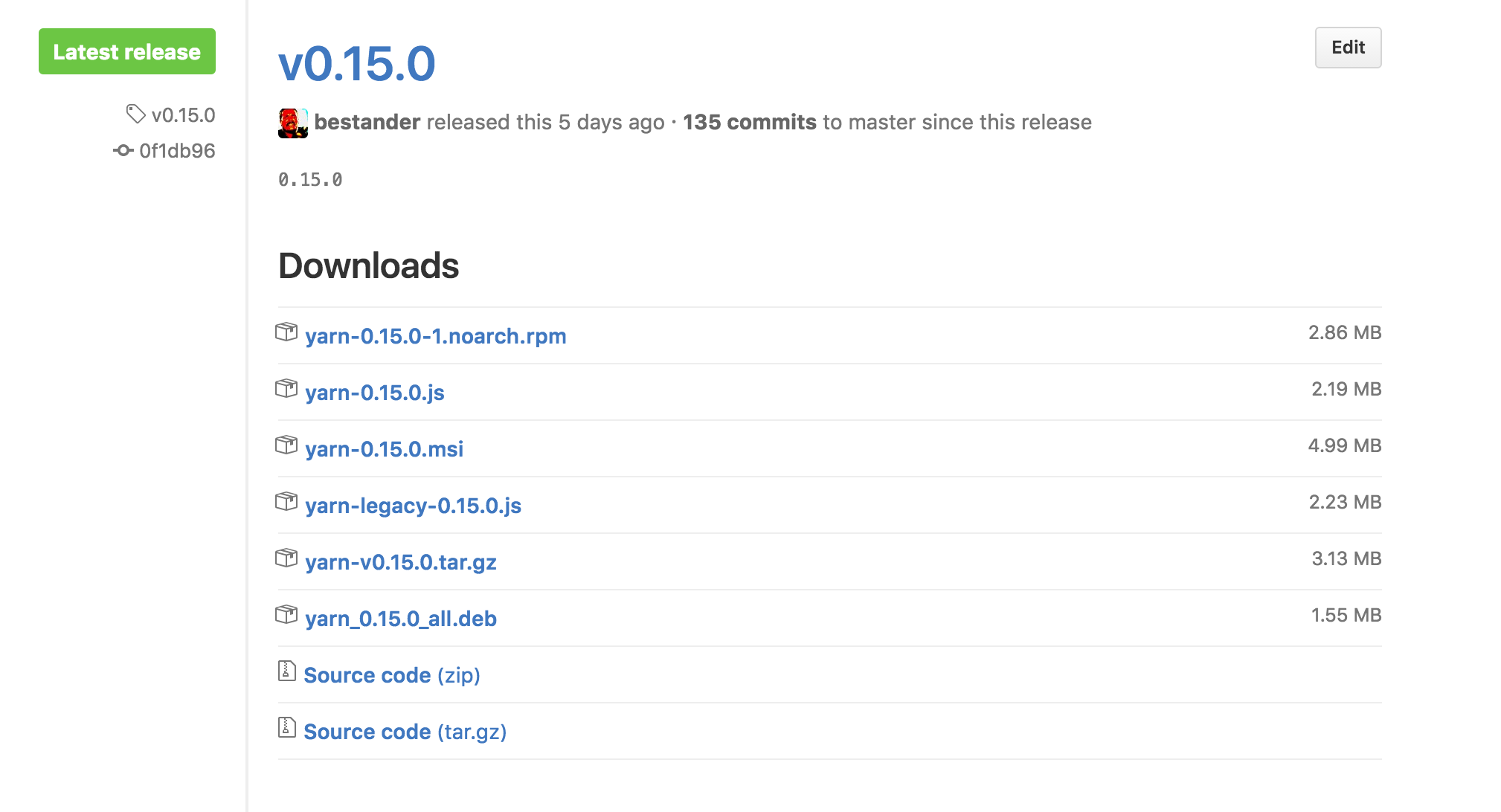 Just check it into your project’s repository and use it in the build script:

This is quite convenient for teams that use multiple operating systems and want to have atomic updates for Yarn.

This is going to get better

The “Offline mirror” was implemented early in Yarn’s development cycle and we are working on improving it in a backwards compatible way: